Disclaimer: This post contains mainly high-level concepts and reference information for a better understanding of the largest audience. It does not go into details about the technical topics covered.

Why talk about diversity in such context?

If you live in Canada, or you are aware of IT newsfeeds, you certainly heard about the major outage Rogers Communications faced July 8, 2022. At the early stages of this event, I was puzzled that such an outage led to service interruption for critical applications such Interac payment platform or a bunch of Canadian government services web portals.

To be honest, I can’t imagine that related decision-makers did not apply fully the diversity principle at the stage of solution design.

What do I mean about the diversity principle?

Among all lessons learned as a problem solver, then as a network solutions designer, one of the most significant is not to underestimate the importance to apply diversity as a key factor for redundancy and security on a technological solution design :

As stated earlier, Interac payment platform was impacted by what I will call from now the “Rogers Outage”. It’s already well known that Interac have chosen Rogers as its main service provider for its operation systems’ network connectivity. So let’s review together how this company applies the diversity principle onto its network design !

Such an organization runs its proper Internet Autonomous System to manage public IPv4 prefixes (AS399405 held under ARIN). So it’s quite easy to retrieve some useful info regarding the corresponding route objects and peering partners : 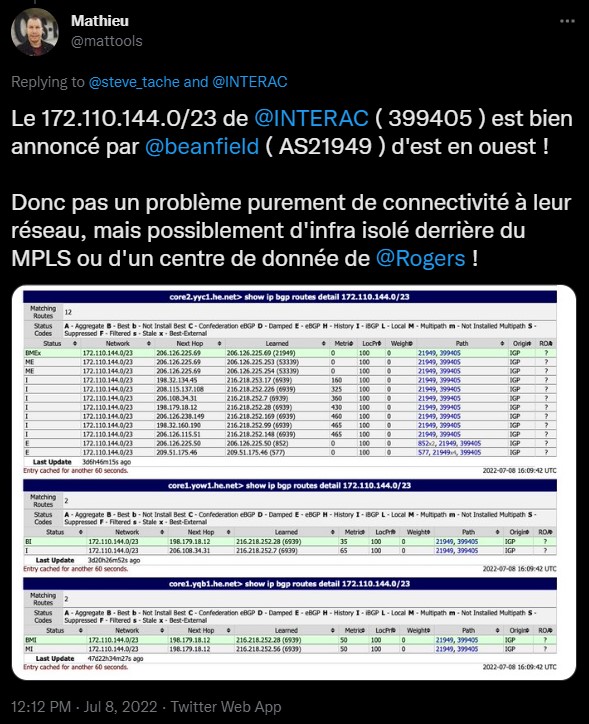 As stated by Rogers in its response to the Request For Information from the Canadian Radio-television and Telecommunications Commission regarding the Rogers Outage :

As mentioned earlier, we know for sure that Internet Transit connectivity setup for Interac operational systems was probably still active through an alternate ISP despite the Rogers Outage. So how can it be possible that a global Rogers outage still results in Interac payment unavailability?

A possible explanation can be that the private network interconnectivity between the different hosting locations for Interac operational systems was relying solely on Rogers Communication backbone, as illustrated in the following diagram (based on my assumptions) :

Remediation plan: apply the principle of diversity for improvements

Still according to the official statement mentioned above, Interac indicated that remediation of this weakest link will be made by “adding supplier diversity to strengthen our existing network redundancy”, and by continuing “to work with our existing suppliers to strengthen commitments” : 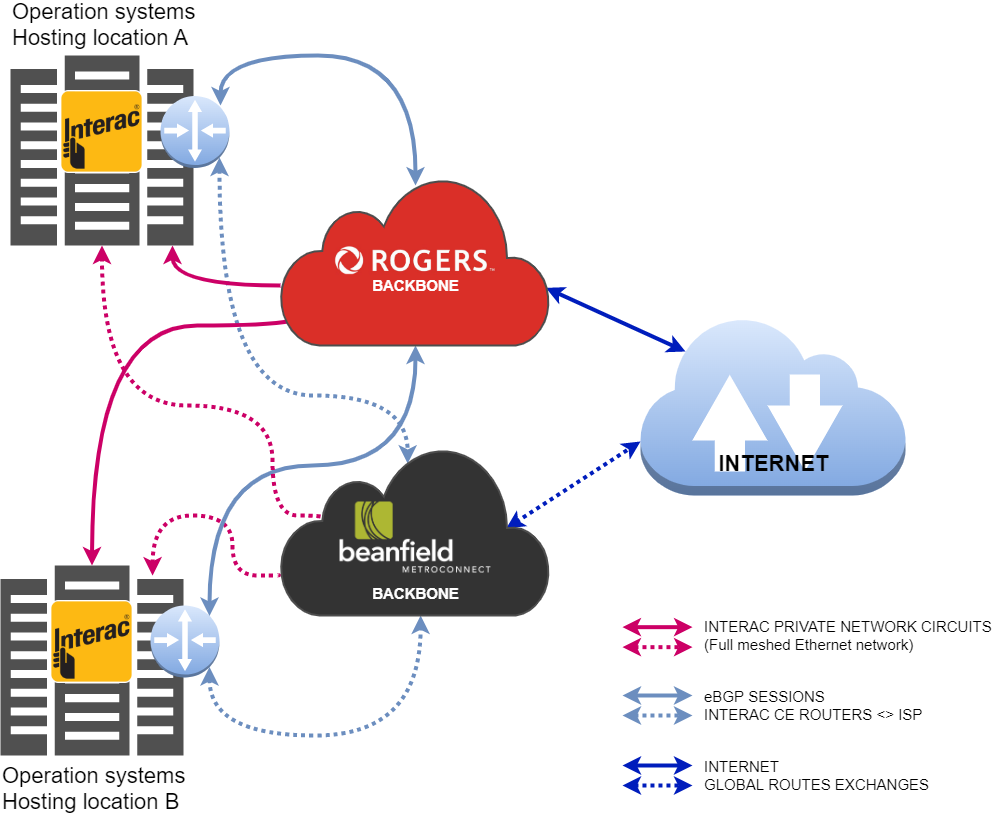 As you can see, this post reflects my own opinions and assumptions about this topic. I’m open to external points of view to elaborate !

So don’t hesitate to reach me on the social medias (links on footer) and react to that post with your own thoughs and words !